Exploring the Haleakala Crater on Your Maui Bike Tour

The large crater is just one of the majestic sights you will find at the top of the Haleakalā volcano on your Maui bike tour. Its dramatic formations and strange features make it feel almost like an alien landscape—quite different from the amazing tropical scenery you will see on the way down with your friends and family. The crater and the volcano are all part of Maui’s Haleakalā Natural Park, one of the most beautiful places on Maui and in the world! 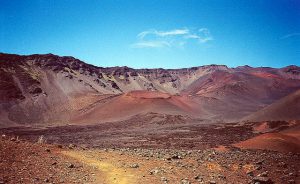 The crater basin at the summit of Haleakalā.

The Crater Was Actually Made by Erosion

Despite what you might expect, the crater at the top of Haleakalā was not created by volcanic activity, but by erosion of wind and rain. The effect has created a stark, desert-like landscape where barren rocks contrast beautifully with the “rare and endemic species” that live there, including Hawaiian honeycreepers and the Hawaiian dark-rumped petrel. Haleakalā, the larger of the two Maui volcanos, is actually believed to have once reached higher—up to an estimated 12,000 feet. Millennia of erosion have worn down the peak, and today, your Maui bike tour will take you to the volcano’s highest point at 10,024 feet. 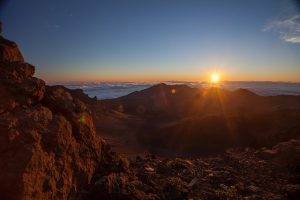 Sunrise over the Haleakalā crater.

The Volcano Itself is Actually Dormant, Not Extinct

The Haleakalā volcano has not seen volcanic activity since 1790, which means that by definition it is dormant, not completely extinct. Geologists actually believe that the volcano has calmed down because the entire island chain is slowly moving—about 2 centimeters a year. Over time, the island has moved northwestward away from the volcanic “hot spot” that originally created Haleakalā volcano. Don’t worry, the geological activity of the island is closely monitored and isn’t expected to change any time soon! The crater is one of the most beautiful places to view the Haleakalā sunrise with your family before your Maui bike tour. 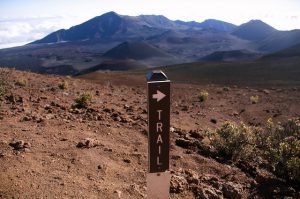 Explore over 30 miles of trails in Haleakalā National Park.

Explore at Your Own Pace

Our self-guided bike tours mean that you can ride at your own pace and stop whenever you want to explore the landscape around you. However, if you still want to see more after the tour, your admission to Haleakalā National Park is actually valid for 3 days! You can come back to see the sunset, stargaze, or experience this “high-elevation ecosystem” along more than 30 miles of hiking trails.

One of the many outstanding views while riding Skyline Trail of Haleakalā. #mauisunriders #maui #hawaii #mtb @bikeonscott ... See MoreSee Less