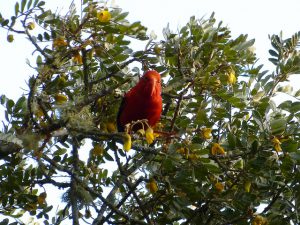 The island of Maui is home to a variety of beautiful birds, and the Upcountry area of Haleakalā is a great place to enjoy the wonders of bird watching. At just below 7,000 feet, the higher altitude of Hosmer Grove Campground at Haleakalā is a perfect spot to catch a glimpse and hear the sweet songs of Maui’s avian wildlife. Along the summit route of Haleakalā National Park, you’ll come across a number of distinct birds. Enthusiasts are always on the lookout for the forest songbirds called honeycreepers. While some honeycreepers are more abundant in the area, sighting of others can be a once in a lifetime opportunity. Here are five birds to look and listen for on your adventures:

Known as the Maui Creeper, the Alauahio is a foraging bird that creeps along tree trunks and branches searching for insects to eat. The Alauahio is a social creature with bright yellow feathers and a short, straight bill. In small flocks, they are known to boldly approach people. This creeper is a more commonly sighted bird in the area. Listen for their chirping song. 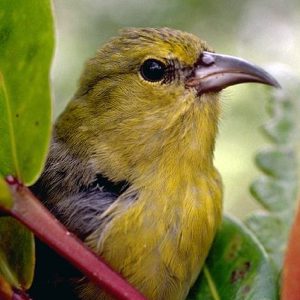 Similar in appearance to the Alauahio, the Amakihi is Hawaii’s most common native green bird. Males are a bright yellow-green while females are a more graying-green. Both have short, downward curving bills that are slightly longer and more curved than the Alauahio bill. Another distinguishing feature is the black streaked lore between the bill and the eye.

With only an estimated 500 of these honeycreepers remaining in the wild, Kiwikiu are a rare sight. This endangered species is found only in East Maui. Look for a stocky bird, olive green in color with a yellow breast, short tail, and large curved bill. Around 5 ½ inches long, they can be noted by a distinctive yellow stripe over each eye. Females have a more subdued coloring and smaller bill. They can also be identified by their rhythmic song. 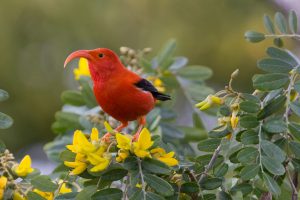 The Iiwi is a more abundant bird to look for in the upper elevations of East Maui. With bright red feathers and a long, peach-colored curved bill, the Iiwi is a larger honeycreeper of around six inches in length. They are nectivorous, feeding on the nectar of flowering plants. The image of the Iiwi is prevalent in Hawaiian mythology and can be seen in much of the crafts and feather work of Hawaiian culture.

One of the largest and most ornate of the honeycreepers, the Akohekohe is over seven inches long and has very distinctive coloring. Their dark feathers are speckled with silver flecks, white tipped tails and wings, and bright orange around the eyes and nape of the neck. Known as the Crested Honeycreeper for the white crest above their bill, the Akohekohe is another rarely sighted bird found only in East Maui. With just an estimated 1,200 population remaining, it is considered an endangered species. Listen for a whistle call and be on the lookout for this rarely sighted bird.

You’ll enjoy an incredibly meaningful Maui experience if you take the time to smell the flowers, watch the clouds go by, take a selfie with a rainbow, and of course, listen to the birds when you’re exploring upcountry Maui.

You can find out more information about Maui Birds on the Maui Forest Bird Recovery Project website: http://www.mauiforestbirds.org

Ready to explore the upcountry wildlife at your own pace? If so, the Summit Tour might be just right for you!