Maui is a geological treasure trove where violent volcanic activity once birthed entire islands out of the middle of the ocean. Today, a rich ecosystem of flora and fauna live alongside hardened lava flows—some of which are estimated to be over a million years old. Over the centuries, this breathtaking landscape has inspired many traditional myths and legends featuring the demigod Maui and Haleakalā (the “house of the sun”), and it continues to draw geologists and other scientists today. Here are a few fun science facts to share with your friends on your next Haleakalā volcano tour!

A Window into the Past

Hawaii is situated near the center of the Pacific tectonic plate where weak areas in the Earth’s crust have allowed molten lava to seep through and create a chain of volcanic islands. Maui is actually one of the younger islands in the group and was born where two volcanos joined to create the “valley isle.” Haleakalā, the larger of the two, is actually estimated to have once reached up to 12,000 feet; however, millennia of erosion have worn it down to form the signature crater at it’s summit. Today, our Haleakalā volcano tours bring you and your bike to the highest point at 10,024 feet.

Now in the 21st century, Haleakalā is not actually an extinct volcano, but merely dormant and has not seen active volcanic activity since 1790. Its calmness is actually attributed to the slow movement of the Pacific Plate, meaning that over time, the island has moved northwestward away from the volcanic “hot spot.” This movement is slow—very slow—only about 2 centimeters a year, but believe it or not, this drift gradually created a string of islands that starts from Hawaii and leads 2,500 miles towards Japan. Even now, the young island of Hawaii continues to grow; however, it’s unclear whether or not the majestic island of Maui will even see volcanic activity again. Rest assured, the volcano is closely monitored, and safety plans are in place in the unlikely event the ancient mountain should ever reawaken. 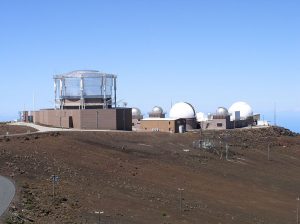 A Stairway to the Heavens

The volcano is not only a great place for biking and exploring but is also home to an astrological observatory! The same clear mountain skies that make for such beautiful sunrises on our Haleakalā volcano tours are also perfect for getting clear images of the heavens with minimal air and light pollution. At 10,000 feet above sea level, the observatory actually sits above one third of the Earth’s atmosphere—what the University of Hawaii calls “one of the most sought-after locations in the world for ground-based telescopes.” The facilities are not currently open to the public; however, their website lets you get a peak at some of their work and even view observatory webcams!

(Facts and geological image courtesy of the National Park Service)