The Maui Volcano and the Legends and Facts That Surround It

At the summit of Haleakalā, Maui’s majestic dormant volcano, it’s easy to forget where you came from as you look out onto what feels like another world. At dawn, the peak itself often becomes its own island, suspended in a soft sea of clouds amidst the scattering of smaller island peaks around you. Although the vistas from this altitude are always spectacular, these moments at dawn are some of the most magical… right before the clouds melt away.

This is, no doubt, why for millennia, mankind has been transfixed by this special spot on the legendary Maui volcano summit and inspired to tell grand stories about it. The Hawaiian people have a great oral tradition, and the story of Maui snaring the sun is one of their favorites!

The Legend of Maui The Demigod and the Haleakalā Volcano

The legend goes that the trickster demigod Maui (after whom the island is named) once set out to capture the sun and convince it to slow down. His mother Hina was a great artisan but complained that she was unable to sun-dry her kapa (bark cloth) because the days were too short. Undaunted, one night Maui journeyed to the peak of the mountain Haleakalā (which actually means house of the sun) and lay in wait for the sun to wake up and rise from its crater.

The details differ from legend to legend, but as soon as the sun showed itself that morning, storytellers agree that Maui swung a mighty lasso and snared the sun, holding it fast! He allowed the sun to go free only after it had agreed to travel more slowly through the sky for half the year. Thus the seasons were born, with shorter days in the winter and longer days in the summer. At last, Maui’s mother Hina could complete her fabrics, and the people of the islands were also able to enjoy the warmth of the sun and taste the fruits of a long growing season. 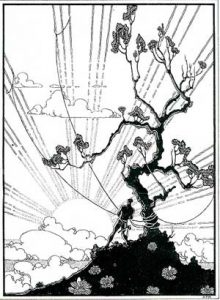 “Maui Snaring the Sun,” a pen and ink by drawing Arman Manookian circa 1927

Some Facts About the Haleakalā Volcano

The jury may still be out on the historical accuracy of this particular tale, but here are a few facts we do know about the Maui volcano!

(“Maui Snaring the Sun” courtesy of Honolulu Academy of Arts)

Thrilled to have had the opportunity to help facil

Gearing up for a loop around the West Maui's tomor

Excited to have linked up with @pycc_maui to find

The ALL-NEW Genius is the ultimate trail bike. Sma

More Maui days like these with the Maui Sunriders

Don’t knock ‘em till you try ‘em! Check out

The ALL-NEW Genius is the ultimate trail bike. Smart suspension, smarter features and the smartest design lead to an unbelievable trail bike that just can’t get enough, no matter whether you’re conquering high alpine trails or shredding single track with your buddies. The Genius. ANY TRAIL, ANY TIME. Visit our shops in Paia and Kihei to ride one! Game on! bit.ly/3feGFfl#SCOTTbikes #SCOTTGenius #AnyTrailAnyTime #mtb ... See MoreSee Less